DaBaby and Megan Thee Stallion have gone from friends to frienemies.

The public wondered how their musical relationship would fare after DaBaby recently appeared on the new song “Skat,” with Tory Lanez, the man Megan has accused of shooting her last July. Now, an allegedly unintended retweet has sparked shots between the two talented MCs. It started on Saturday (June 19), when DaBaby retweeted a Twitter post that joked about the alleged Tory shooting.

“I guess @DaBabyDaBaby and @torylanez cool now bc the both shot somebody and don’t have to do no jail time,” the tweet read, followed by a crying laughing emoji.

DaBaby later claimed there was some sort of glitch. “Idk what type of Illuminati shit Twitter got goin on,” he tweeted. “I ain’t retweet nothing but ‘Ball If I Want To’ promo. I ain’t retweet that silly shit. Then once ppl start tagging me & I saw it and tried to delete it and undo the retweet Twitter didn’t let me. Type shit yall on?”

It appears Megan wasn’t buying it. A short while later she tweeted, “Support me in private and publicly do something different…these industry men are very strange. This situation ain’t no damn “beef” and I really wish people would stop down playing it like it’s some internet shit for likes and retweets.”

Baby then downplayed the incident. “You done let these folks get the best of you thug,” he responded. “ion got no bad energy for ya. You know like I know I ain’t no ‘industry’ nigga , let em fool you into thinking that you trippin. Stand on what you stand on without feeling like I’m against ya. Stay focused my g.”

Megan fired back, bringing up a conversation the two previously had concerning his affiliation with Tory. “My stance hasn’t changed at all YOURS has. We already spoke abt this in private and you specifically said ‘that ain’t even no good business move why would I promote that shit’ but now this ain’t your ‘beef’ ? That ain’t real. But you stay on ya ‘business’ my g.”

DaBaby kept the back-and-forth going. “You ain’t tweeting nothing I ain’t tell dat nigga directly,” he added. “I told him da same shit. lol Whoever cleared it cleared it, so what. Shit still ain’t enough of my bidness for MFs to be feelin some type of way bout my pretty chocolate ass. Gettin into dat don’t feed my ppl.”

Megan was done talking, but DaBaby’s continued tweets prompted her boyfriend Pardison Fontaine to step in and say something. “You a clown ass nigga doin doin clown ass shit then tryin to back pedal .. nigga that’s what it is .. u don’t ever gotta address her again,” Pardi wrote under one of DaBaby’s tweets.

Megan unfollowed DaBaby on Instagram earlier this week. Now this. It looks like that DaBaby and Megan album we were teased with back in 2019 is officially off. 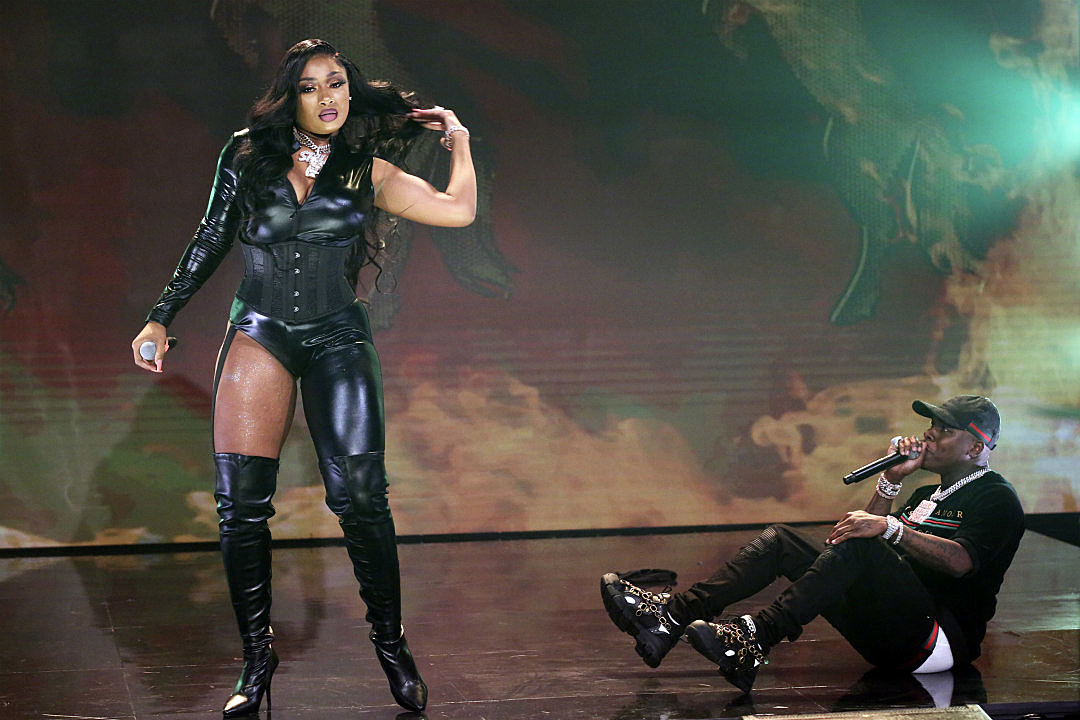 Hip-Hop Albums That Didn’t Live Up to the Hype