The 2021 XXL Freshman cyphers are finally here and best believe that they’re starting off with a bang. The first group with the task of showing and proving why they landed a spot on the coveted cover consists of 10th Spot winner DDG, Quality Control Music signee Lakeyah, soul crooner Morray and social media savant Coi Leray.

Each of the four acts use bull-ish bars and no-Auto-Tune warbling to skate through an enchanting beat, twirled with assuaging key melodies and pounding bass drops. That soothing foundation is set by none other than Internet Money creative Nick Mira, who serves as this year’s Freshman beat curator. Nick, who recently launched his own Mira Touch record label, produced the beats for each cypher along with a few Internet Money producers.

Michigan’s own DDG is the first rapper on the starting blocks with a domineering verse about toting clips longer than Jamaican hair, turning the cheek on his haters and running up the digits in his bank account. “Niggas switch up for the dollars/I be tryna be positive, but the drama/It be constantly following on my mama/But I guess it’s the side effects of the commas,” he delivers in a brash tone.

Next is Milwaukee seed Lakeyah, who picks up right where YouTuber-turned-rapper DDG leaves off. The self-proclaimed “Female Goat” takes a no-mercy approach to the beat as usual, and offers a hot rhyme about beating the odds to a pulp. “How the fuck she a Freshman when she dropped out of college?/And how the fuck she go so hard when she look like a model?/Buy a bitch life, legally I can’t even buy me a bottle/They know I’m a problem,” she spews briskly in just under one minute.

After cosigning Lakeyah’s verse preceding his with an accurate “fucking fire,” Morray slides through with a sing-song flow that’s heard on tracks like the gold-selling “Quicksand.” Truly off the top of the dome, the Fayettenam stepper has in fact arrived with a chip on his shoulder and a strap on his hip. “Fuck it, don’t gotta write it/Fuck it, I rather spit it/Niggas talkin’ ’bout toilet bowls, bitch I’m shittin’/Like, whoa, what you mean you want the dough?/And you niggas talkin’ bullshit, but I’m the one with the flows,” he declares matter-of-factly. “Off the top bitch this shit is hot, what the fuck you niggas know?/When I come outside the strip club, I’m coming with the poles.”

Boston and New Jersey reppin’ Coi Leray swaps her red cup with the mic and drives things home with a quotable ballad about camaraderie and commas. “C-O-I, love it when he say my name, yeah/Low-key, that my little sneaky link, aye/Yeah, I love when he fuck me to the beat, aye/He a freak, fell in love with me, let’s go” she spits. Showing off her versatility, she croons during the second half of her rhyme before busting out into a mini twerk session.

Her last few lines are built around the phrase “We all get money,” which Morray uses as a base to dip back in with his church-grown harmonies for the outro. The beat fades as he salutes his group for their performance: “XXL, we in this. Aye, DDG, we did this/Lakeyah! Yeah, we did it,” he stamps, feeding confidence into his fellow Freshmen.

Visit the Official 2021 XXL Freshman Launch Page for Each Artist 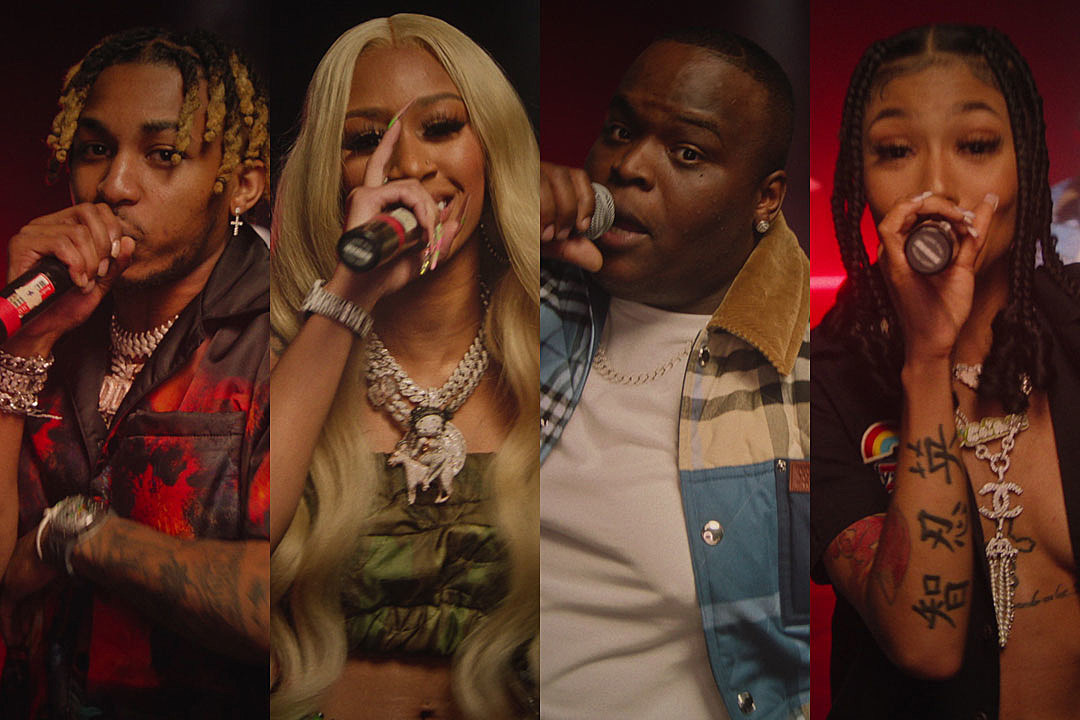